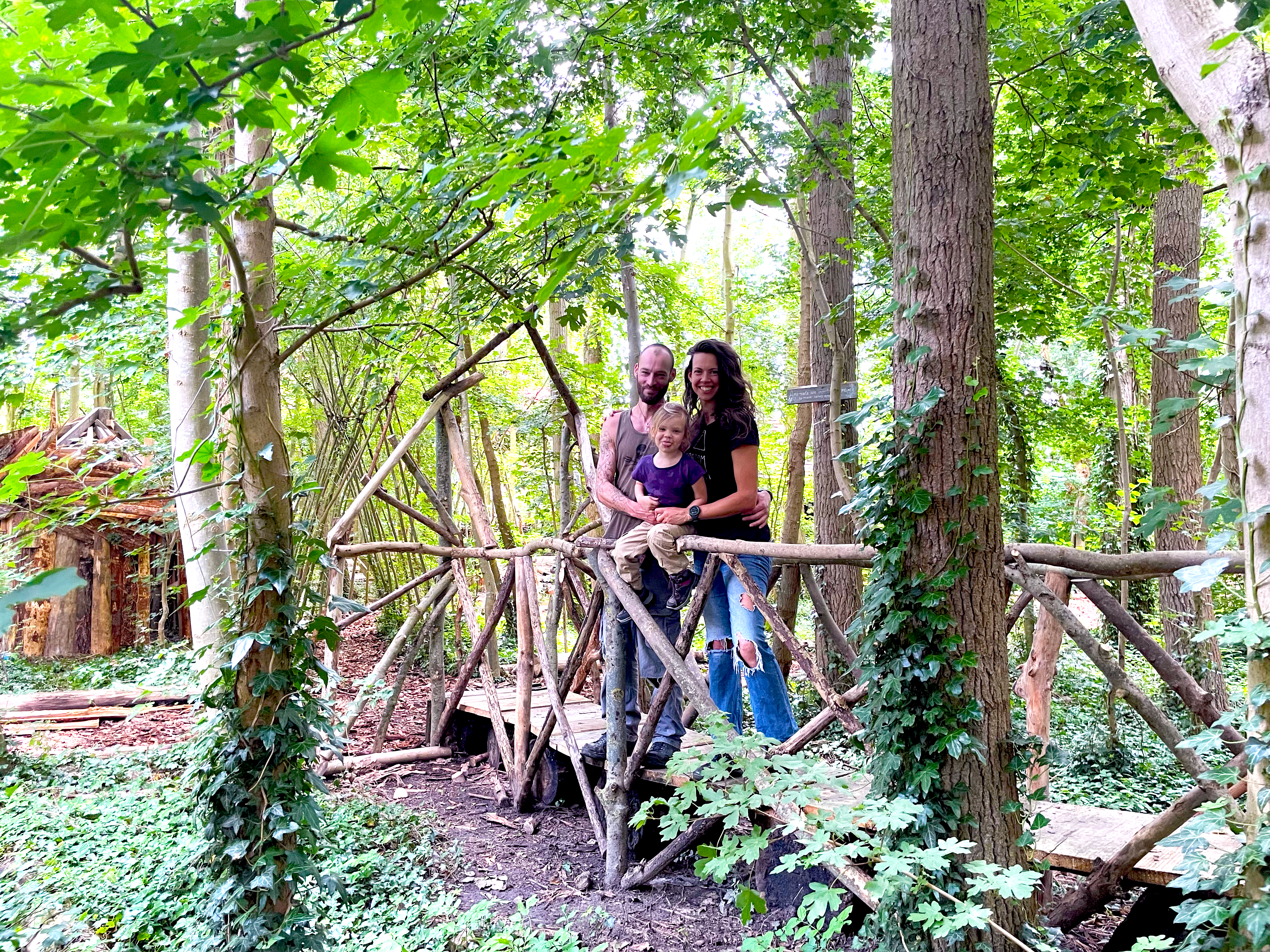 Two regulars who can often be found at the Paradigm terrain, where they create one beautiful construction after another: Harmen and Joke. They’ve been a part of our community since the 2nd edition of Paradigm Festival. They started out as volunteers, doing the odd jobs here and there for a free ticket. Their involvement evolved over the years, as they were both given the space to express and develop their artistic creativity. They’re now a full deco-team these days, designing awesome ideas and putting them into practice throughout the year, with Paradigm Festival being the pièce de résistance. They’ve got some extra help this year: their daughter Kyra often comes along to play on the terrain and helps out whilst wearing her little work shoes she dubbed “Paradigm-shoes”. We’ve had a nice chat with them and talked about their plans for Paradigm Festival 2021.

Hey Harmen, Joke and Kyra. What are we looking at?
Harmen: We’re creating a wooden octopus in the forest, an idea conjured up by Joke. The head is a large object, sprouting arms from eight different spots out of the ground, crossing paths and walkways. We’re constructing suckers out of little wooden discs. We’ve also cleaned and upgraded all the little walkway bridges in the forest and added some more decorations. The Forest will have more walkways than ever before for everyone to discover everything the forest has to offer during the Festival.

Kyra: I’ve got a mosquito bite.

Which additional materials will you be using?
Harmen: Mostly materials that’ve been used in past projects and deco pieces. For our current project we’re salvaging scalings, wooden beams with a bark edge and old tree trunks. Wooden trusses will make up the foundation of the construction. And empty jars. We’re going to turn those into treasure chests.

Joke: We’ve also salvaged a couple of fishing nets to serve our purposes!

Harmen: The only ‘new’ material we’re using are screws, really. That’s it. Using residual materials always adds an extra layer of challenge to a project: the materials usually don’t complement our needs perfectly so we have to modify them as we go. This is extra satisfactory to accomplish as a result, seeing as beautiful projects can still come to fruition using these materials.

How would you describe the style of your creations?
Joke: It’s okay if it’s a bit rough around the edges with a natural feel to things. We tend to create suggestive things, not necessarily scale models.

Harmen: Exactly! We want to leave something to people’s imagination and stimulate their senses! We absolutely love it if people interpret our works in unexpected ways that don’t align with our initial ideas. That they’re surprised time and time again.

Joke: For them to feel like a kid again, to discover hidden pathways both intended and off the beaten path. For example, if you follow a certain path, you’ll end up in the head of the octopus! That’s the stuff we live for.

Harmen: The forest itself is beautiful on its own already. It’s even better to be able to work with it, enhance it in our own ways. We take that into account and tend to work with the way the forest is set up. Larger constructions are made to last for years, too! 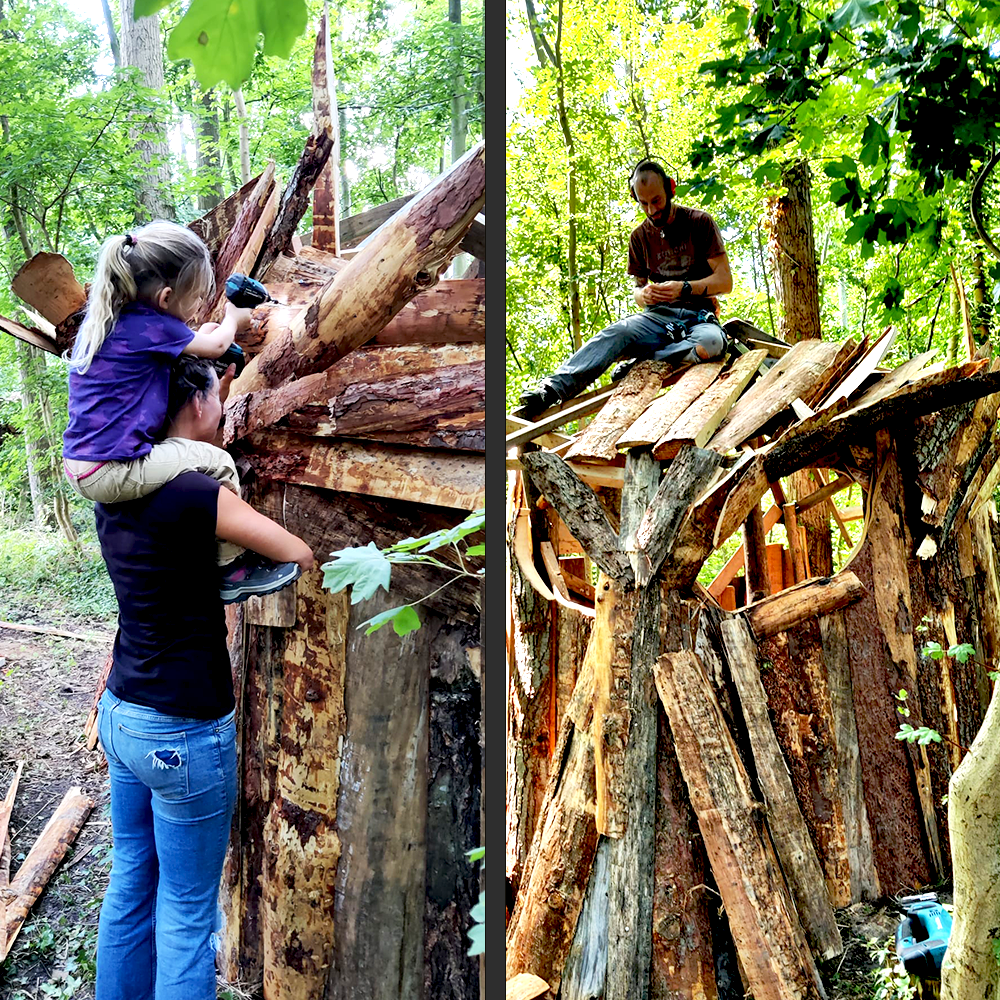 What can you tell us about the theme?
Harmen: We’ve pieced together our own story about pirates!

Joke: Pirates are awesome. Freebooters if you will, just like we are. A little anarchy together with, in this case, a high cuddling rate. Incredibly fashionable nomads, which immediately sets the tone and vibe.

Harmen: We’ve got free rein regarding our theme and we hungrily grasped that opportunity. In our story, the pirates had to shift their activities towards land, seeing as the sea has been polluted so heavily that they had no choice but to head to shore.

Joke: Kyra has a book called The Pirate Cruncher by Jonnie Duddle. The book is riddled with illustrations of little pirates and sea monsters. This has been a low-key source of inspiration!

Kyra, whilst pointing towards a water skin: This contains water! Nice huh?!

What else are you planning to create?
Joke: Everything is related to the development regarding festivals. We’re hoping for clarity soon so we can really unpack and work out details to strengthen the story we want to present!

It’s already looking gorgeous! Can you tell us something about your personal motivations to create, at Paradigm in particular?
Joke: The togetherness. The energy and dynamics that usually comes with a construction week. The collective mind but also your own development. In our case, Harmen is the one with the technical know-how and he helped me out with lots of my ideas. But at some point he wasn’t around for a little while, which forced me to rely on my own skills. Slowly but surely I learned to do the things Harmen does by myself, which really boosted my confidence levels. It’s also great to be able to show someone else how it’s done and you’ll learn from them in turn too! The freedom and opportunities we’re offered are great for self-improvement. If you’ve got the drive, you can learn a lot here.

Harmen: What I love about this is that I’m able to do things that I normally won’t spend as much time doing in my every-day life! You’re developing and improving upon an ever-expanding skill set! Also, just take a look around! It’s such a brilliant place to work and become inspired.

Joke: The fact that SAC was cancelled was a heavy blow for all of us. That same uncertainty is still palpable, which is hard to deal with. But we want to stay optimistic!

Kyra: There’s a spider on your shoulder.

What do you think is the purpose for your creations?
Harmen: We want people to feel stimulated into feeling like a kid again!
Joke: To make people let go of the grind of everyday life. Kyra, just like the kids from Paul and Piter, are discovering everything the forest has to offer at the moment and we want visitors to experience a similar feeling when coming over during the festival!

Kyra: Mommy, I have to poo.